Today, NASA announced the discovery of a record-breaking seven terrestrial (i.e. rocky) planets orbiting a single star roughly 40 lightyears from Earth. Perhaps more importantly, (another record-breaking) three of them are located at a distance where it’s highly possible for liquid water to exist on the surface.1

Our own Solar System also has three planets – Venus (if you’re feeling generous), Earth, and Mars – within the so-called “habitable zone”, the size of which is determined by the type of star the planets orbit. However, as we very well know (see: Venus, Mars), mere distance does not an Earth-twin make.

Scientists originally predicted three planets orbiting the star dubbed TRAPPIST-1 (named after the Belgian-run Chilean telescope that found them) back in May 2016; further data from the Spitzer Space Telescope and other ground-based devices confirmed the presence of two of these planets, and found five more. This was done by measuring the light from TRAPPIST-1 for many weeks; periodic dips in the data indicated planets transiting the star and blocking some of the light from reaching us. The frequency of a same-size dip revealed the time it takes for one planet to complete one orbit.

The outermost planet – only observed to transit once in the 500-hour observation period – is roughly four times closer to its star than Mercury is to the Sun. The innermost orbits in just over one and a half days. They’re all so close, in fact, that there’s a high probability that they’re all “tidally locked” with TRAPPIST-1, meaning that one side of each planet constantly faces the star, and the other is in perpetual darkness.

The “transit method” for finding extrasolar planets also allows astronomers to calculate physical size, but the TRAPPIST-1 system provides some bonus data: the planets are all so close together they affect one another gravitationally, altering the theoretical transit times accounting for only the distance from the star. From this difference, astronomers calculated the masses for six of the seven planets.

For most of the known exoplanets in the galaxy, we only have a mass or a size. But with both, we can calculate a density and know if the planet’s terrestrial, a rocky snowball, or a ‘gas giant’. Dr. Thomas Zurbuchen (NASA Associate Administrator) said during the press conference that one mass measurement (planet f) was good enough to suggest the presence of water. 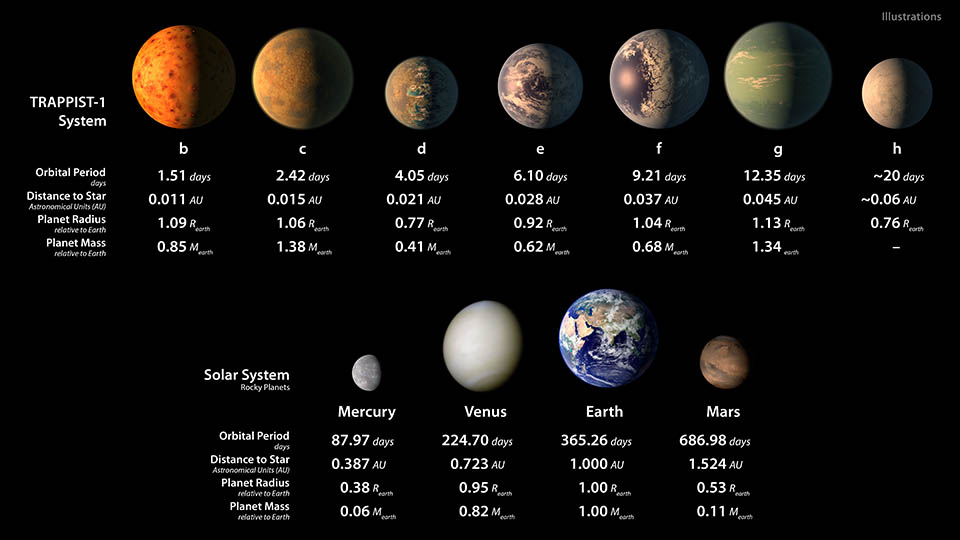 As for the star itself, TRAPPIST-1 is an “ultra-cool dwarf”, just barely large enough to fuse hydrogen in its core. It emits 0.05% the light the Sun does over all wavelengths. (Aside: If the Sun were the size of a basketball, TRAPPIST-1 would be a golfball.)

But because it’s so close, TRAPPIST-1e would receive the same amount of light as the Earth gets from the Sun (though much more of it in infrared wavelengths); planet f, meanwhile, would get about the same light as Mars. The largest of the seven – TRAPPIST-1g – receives light equivalent to a position between Mars’s orbit and the asteroid belt.

Because all these planets are so close to one another, you’d basically be able to see all of them like moons from any one of the planets. In fact, if you were looking up at the right time of year, some would be even larger than the Moon in our own sky. NASA made a cool tourist poster featuring this awesome, commonly-appearing-in-scifi phenomenon:

When they’re young, ultracool M dwarfs like TRAPPIST-1 are known to be very active, spewing out lots of harmful radiation, and possibly eroding planetary atmospheres. They’re also much brighter before they initiate fusion; this means that planets in the habitable zone of an older M dwarf were inside the habitable zone for a long while in the past, and could have been made inhospitable for life despite being at the ‘right’ distance now. The academic paper reporting on this discovery – published in Nature and unfortunately behind a paywall – suggests “the planets formed further from the star and migrated inwards”, which would give life a better chance. Also, a planet could replenish an atmosphere through volcanic eruption or comet collisions.

We don’t know TRAPPIST-1’s exact age – it could be anywhere between 500 million years or many billions of years old2 – but it has quieted down somewhat. That being said, the star has flares about once a week, and does emit as much x-ray radiation as our Sun on a quiet day, despite emitting, overall, far less light across the EM spectrum, so the much closer planets would receive much more intense irradiation than the Earth does. A robust atmosphere and magnetic field would help shield a planet from these rays.

The fact that TRAPPIST-1 emits mostly infrared light doesn’t limit chances for life. Some plants on Earth can photosynthesize with this longer-wavelength radiation, so it’s not out of the question life on any of these planets couldn’t do the same with even more efficiency.

Speaking of photosynthesis, we also don’t need to find atmospheric oxygen for there to be life! Earth had a major extinction event when new photosynthesizing lifeforms started producing so much oxygen that it couldn’t be absorbed by the oceans or rocks, so it escaped into the atmosphere. Oxygen gas reacted with the methane, breaking it down into the lesser-greenhouse gas carbon dioxide and caused a 300-400 million year ice age. It also killed off most of the existing life because oxygen is a very reactive element. It’s basically toxic, even to us.

Finding oxygen in the atmosphere could be a sign of native life; it might not. Same with methane, another byproduct of life on Earth.

The TRAPPIST-1 system has been called a “laboratory” – a great opportunity to study how rocky planets in the same stellar system can evolve differently (just like ours has). It’s also demonstrated exoplanets can be found around the very low-mass stars, which had previously gone unchecked in exoplanet searches. The SPECULOOS (short for…Search for habitable Planets EClipsing ULtra-cOOl Stars) project will, as the same suggests, continue to look for habitable planets around other stars like TRAPPIST-1. This includes constructing four telescopes (grouped together) down in Chile.

In the meantime, the Kepler spacecraft is observing the system RIGHT NOW (from December 15, 2016 to March 4, 2017) – this will allow astronomers to determine TRAPPIST-1h’s orbital period, as well as refine mass estimates.

Astronomers plan to use the James Webb Space Telescope (launching 2018) to look at these (and many other planets’) atmospheres. After determining the types of gases, astronomers can make better estimates for surface temperatures, and thus adjust the possibilities of liquid water (Again, consider Venus vs. Earth, vs. Mars). Hubble has already completed some transmission spectroscopy3 measurements of the two innermost planets, and was unable to find Hydrogen or Helium – the two gasses that make up the bulk of ‘gas giants’ atmospheres.

The IAU did have a campaign a while back to name a very small subset of the so-far discovered exoplanets and their orbited stars; you can check them out, here. However, the TRAPPIST-1 system isn’t likely to get non-catalog names anytime soon.

According to Dr. Michaël Gillon, whose team discovered TRAPPIST-1, the planets should be named after the first seven Trappist beers.

For more information you can visit the stellar system’s website www.trappist.one.

1. Technically, with the right atmospheric conditions, any of the seven planets could have liquid water, but planets 4, 5, and 6 are the more optimal locations. ↩
2. TRAPPIST-1 belongs to the oldest-living group of stars – it’ll be around for trillions of years. That’s why it’s hard to get an accurate age – it does it reeeeaallly slowly. ↩
3. Each chemical element and compound absorbs a unique combination of light wavelengths (We call this a “spectrum”). As we observe a single planet transiting, the gases in the atmosphere will basically subtract their unique spectra from the starlight as it passes through on its way to our telescopes. All we have to do is look at what light’s missing and match it up with the correct combination of gases. But because these planets are so tiny compared to their stars, we have to leave the telescope pointed at the system for a really long time to collect enough data. Stars that are too far away/too dim make poor candidates for determining atmospheric composition due to the total observing time required – too much time the telescope could only spend on that one project. And time is money. Lucky for us, TRAPPIST-1 is very close and thus an ideal candidate. ↩