It’s safe to say the most recent entry into the MCU is different than the comic upon which it is based — the six part story called The Infinity Gauntlet (1991). About the only thing they have in common is this: Thanos gets his hands on the Infinity Stones, and a colorful bunch of characters try to prevent him from keeping them. 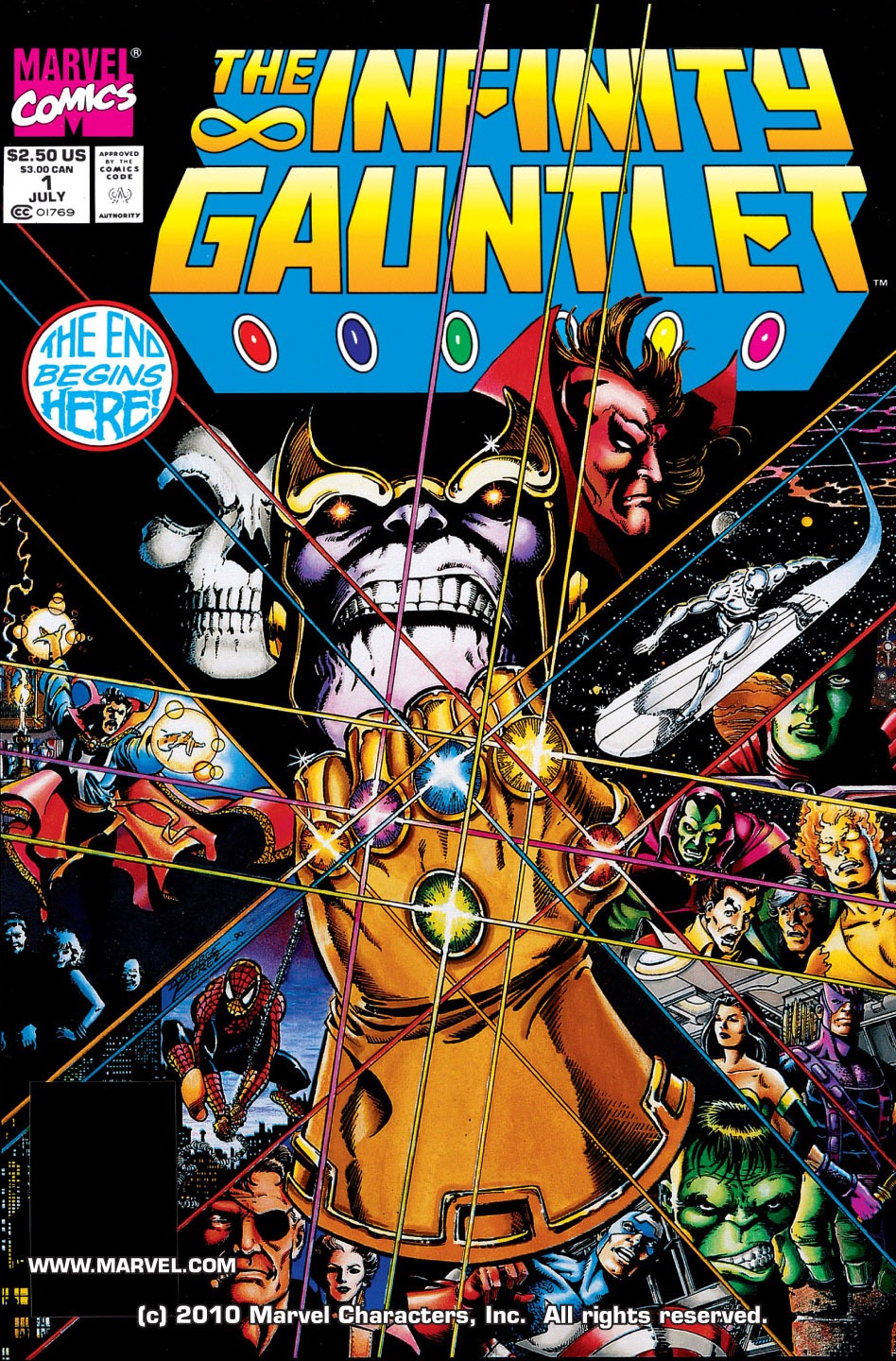 This is not me bashing on the movie. You might think that, given the title of this post. But no; that was just me trying to make a pun. There are very obvious reasons why the film and comic run can’t be identical.

I’m just here to break down some of the things we missed out on.

The MC(omics)U was 30 years old come Infinity Gauntlet, so writers had the time to create some rather ridiculous characters that we’re unlikely to ever see in the MC(inematic)U. Like the character Eternity, who’s basically the personification of reality and whom Thanos usurps when he sheds his physical body (for, like, a whole minute). Or whoever this blue minotaur servant of Dr. Strange’s is. 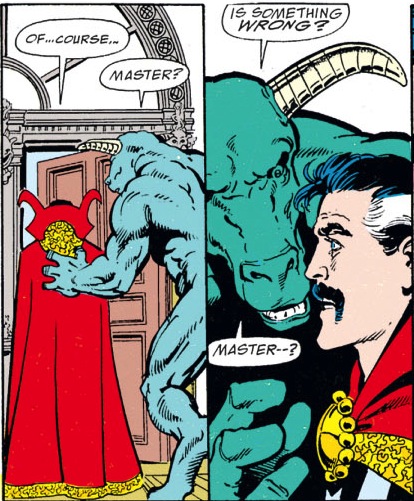 All the individuals who possess the “Soul Gems” (later dubbed Infinity Gems) are way more cosmic than we see see in the movies: The In-Betweener, The Champion, The Gardener, The Runner, and – the two that have managed to show up in the MCiU – The Collector and The Game Master.1

As such, we miss out on a bunch of great moments from the 2-parter The Thanos Quest (1990), which details how Thanos collects all six Gems. Like that time he tricks a dude into punching a planet to smithereens, or kills another dude by making a plant grow through his body, or turns yet another dude [Why are the holders of the Soul Gems all dudes?] into a baby.

The MCU has only started dipping its toes into the waters of Marvel’s cosmic characters, so while Feige & Co. saw fit to introduce us to a few new baddies this time around (perhaps strangely, ones that don’t appear in The Infinity Gauntlet), there’s no way they’d be able to tell the same story.

Adam Warlock is one of the central characters in the comic run – he’s the dude who actually ends up with the magic glove at the end – and he’s merely an easter egg in an after-credits scene (by name only) in GotG Vol. 2! This might be all for the better, ’cause he’s kinda a douche who intentionally sends the Avengers to Thanos as a temporary distraction.

Of course, there are also a bunch of characters that have seen the light of day in Marvel films, but they can’t appear in Infinity War due to those meddlesome studio rights. The Silver Surfer is really the only one that really suffers from this, as the rest are bit parts – like Wolverine and Cyclops (X-Men, FOX), Dr. Doom and Galactus (F4, FOX), Namor (?), and She-Hulk (Universal). Mephisto’s in a lot of panels, hanging around Thanos as a sycophant hoping (and failing) to get his own grubby hands on the gauntlet, but after the Ghost Rider franchise, I don’t think we’re going to be seeing him in the MCU anytime soon, whoever holds the rights.

Since we have such a different cast of characters, a lot of the MCU heroes in Infinity War weren’t even in Infinity Gauntlet.2 Black Panther, Hawkeye, Wasp, and Wong disappear when Thanos kills half of all living beings in the galaxy. Gamora’s soul (or something) bodyhops into a dead criminal before all the action, then disappears, and then shows up after the universe is saved.

Drax is the only Guardian with any real part to play (He punches stuff with Hulk) – Peter, Rocket, and Groot aren’t even acknowledged as existing. Neither, for that matter, are Loki, Falcon, Bucky (The Winter Soldier is just too long a name, guys), and Ant-Man.3

Meanwhile, Dr. Strange and Black Widow mostly just hang out on Earth. The latter doesn’t have anything to do with the main plot – she just saves random citizens from collapsing buildings. Strange acts as a teleporter, and ends up where the action is in part 6, but just stands there and does nothing à la Uatu.

Basically, all the good guys we know and love play no part in the plot past issue 4, if they had one to play at all.4

And then there’s Nebula… 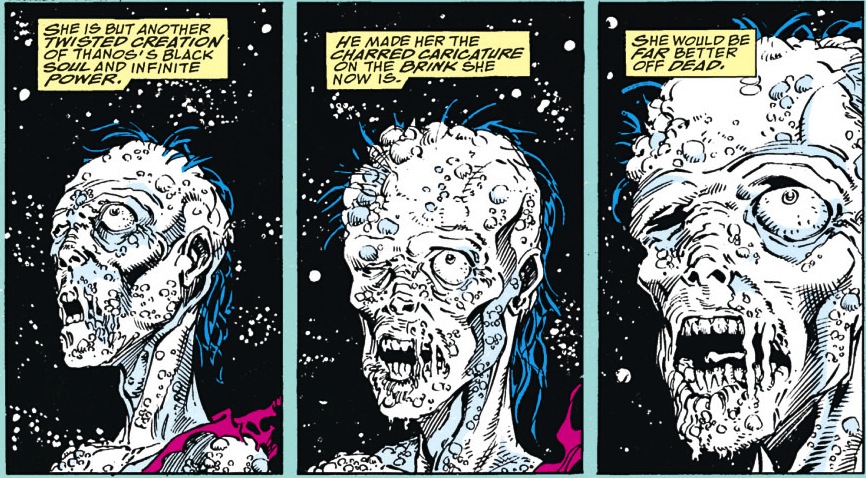 You might think there’s some serious family drama going on with Thanos and his forced-adopted kids in the MCiU, but oh. Oh dear child. We have completely missed out on zombie Nebula.

Thanos turned his “granddaughter” Nebula into a living corpse. She just stands there and moans silently (or so I like to imagine), until Thanos does a dumb and leaves his body to take Eternity’s place as reality. Then, she takes the gauntlet herself and a few not-dead heroes have to fight her for over 1/6th of the story. 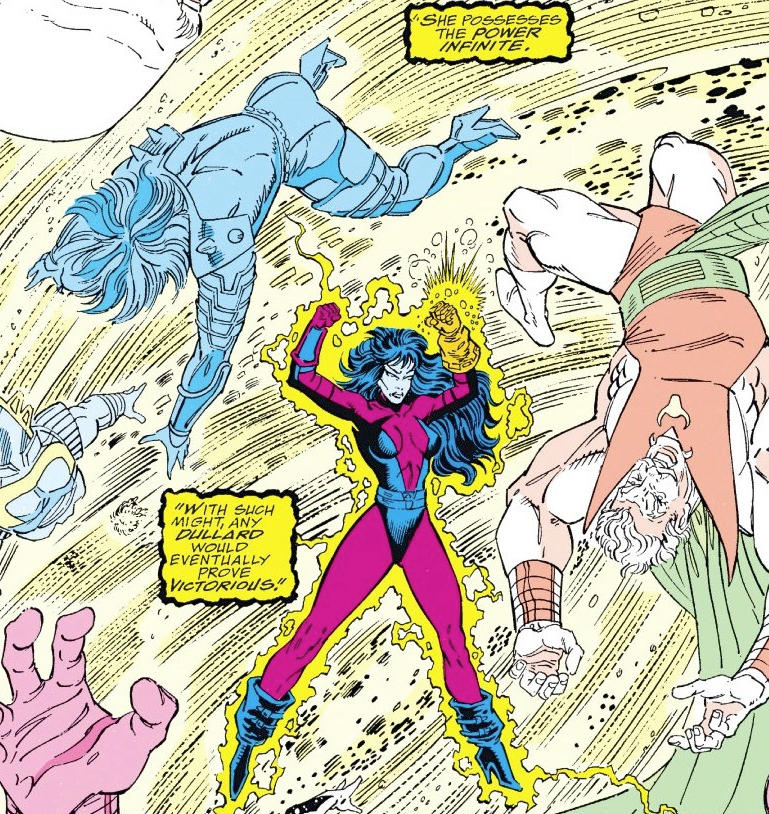 So if you’re betting on the chance we’ll see someone other than Thanos wield the power of the Stones in Infinity War 2: Electric Boogaloo, Nebula might not be an absolutely terrible choice.

But anyway, here’s a quick list of some of the other things we’re missing out on from The Infinity Gauntlet. Maybe some of them will happen in the sequel…

and, perhaps most importantly,

1. Sadly, Jeff Goldblum does not have one of the stones. He isn’t in the movie. And let’s be honest, we’d all want to see how that fight would go. ↩

2. Funnily enough, all four members of the F4 disappear, so no wrangling for rights needed, there, except to merely acknowledge their existence…and then lack, thereof. ↩

3. Hank Pym shows up at Strange’s to offer medical aid to the Surfer, but plays no part in the fight. That is strangely more than he appears in the movie, which is not at all. ↩

4. Wanda, Vision, Thor and Iron Man all die — the latter may or may not have gotten his dead ripped off by Thanos’s Galatea that he calls Terraxia. Thor, he turns into glass then breaks into tiny pieces. He gets better. ↩

5. Infinity War does end with a suspiciously similar shot of Thanos sitting down and looking off into the distance. But he’s just killed half the universe and he considers it a job well done…and presumably time for a nap. ↩

Actually, there is one thing the movie does have in common with the comic: Black Panther is one of the half Thanos killed by snapping his fingers. So there’s that.