The hunt for life beyond Earth continues! NASA’s press conference today shared the results of two new papers (1 – open access, 2 – behind paywall) that shed more light on the so-called “Ocean Worlds” of Europa and Enceladus.

Both moons (of Jupiter and Saturn, respectively) are believed to possess liquid water flowing underneath a crust of ice. And on Earth, where there’s water there’s generally life. That includes places once thought inhospitable, like deep ocean trenches where no light reaches. There, instead of undergoing photosynthesis, life feeds on chemicals ejected from hot hydrothermal vents to produce energy. It’s places like these that give astrobiologists hope for finding life on the icy worlds in our Solar System, even though this is yet another press conference not announcing we’ve found any.

Back in 2005, the Cassini satellite – currently mere months away from ending its mission by plunging into Saturn – revealed amazing plumes spewing out from cracks in Enceladus’s ice-covered surface. Ten years later, by flying through these plumes, Cassini detected molecular hydrogen (H2), which could be used as ‘food’ in the subsurface ocean.1

Enceladus is too small to hold onto any stored hydrogen for long – in an atmosphere, its icy shell, or its ocean – so the detected H2 must be continually produced by the moon. But how might it be created? The paper’s authors claim it’s most likely hot rocks chemically reacting with the liquid water (Remember, each water molecule has two hydrogen atoms!) at the ocean’s base, similar to the hydrothermal activity on our own ocean floor. Evidence of hydrothermal vents also exists in small ‘glass’ beads found in Saturn’s E ring – which is fed by Enceladus’s plumes. Meanwhile, thermal images show hot spots aligning with the cracks – or “tiger stripes” as they’re affectionately known2 – from which these plumes emanate.

If any microbes do happen to be swimming about in Enceladus’s ocean, they could use the hydrogen and carbon dioxide to produce energy necessary for basic biological functions (This process is called “methanogenesis”, after its chemical byproduct methane). During the press conference, co-author Dr. Christopher Glein announced that the vents – assuming they exist – could provide the ecosystem the equivalent caloric content of “300 pizzas per hour”.

However, NASA’s astrobiology senior scientist Mary Voytek3 did warn us that the presence of hydrogen and carbon dioxide may also indicate an absence of life, because there aren’t any creatures to use the molecules up. Also, the paper identifies possible explanations for the presence of hydrogen gas other than hydrothermal vents (for example, “ice radiolysis” – radiation from the Sun striking and then decomposing water molecules into oxygen and hydrogen gas).

Europa is about the same size as our own Moon (Enceladus is much smaller), but might have twice as much water in its ocean that the Earth does. It was, appropriately, the main setting of the 2013 film Europa Report – a SciFi found-footage (presented as a documentary) thriller I am about to spoil the end of, so if you haven’t seen it scroll down to the next paragraph. An entire team of astronauts goes to Europa (minus one guy who asphyxiates out in the void of interplanetary space), then dies one by one. The last shot from a security cam that makes it back to Earth contains an an alien squid-like creature.4

The real news from Europa is understandably less exciting, but is also another stepping stone in understanding the Ocean Worlds in our Solar System. The Hubble Space Telescope was watching the moon for plumes, successfully catching two erupting from roughly the same location – one in 2014 (to a height ~50 km), and the other last year (~100 km). This repetition helps bolster the evidence that Europa indeed has plumes, because there’s less chance that both were flukes in the HST’s images. The location of this plume – like Enceladus’s – corresponds to an unusually warm region on the moon, according to data collected last millennium by Galileo.

This heat signature might also come from some sort of hydrothermal vent, or it might be caused by the ejected water falling back down and helping retain heat in that area (Note that the red region has a temperature higher than 95 Kelvin, or -289 degrees Fahrenheit). The ultimate source of the heat likely comes from the tidal forces exerted on Europa by Jupiter and the other three Galilean Moons. Europa’s surface can rise and fall by as much as 30 meters every few days, and the heat generated by all that gravitational tugging has to go somewhere.

The team responsible for finding these plumes – led by Dr. William Sparks – will continue to monitor Europa with Hubble for more evidence of these plumes and determine how frequently they occur. While there is a spacecraft in orbit of Jupiter right now (Juno) it isn’t equipped to study these features. (It was, in fact, launched before any evidence of plumes on Europa was observed.) Most of our data on Europa comes from the Galileo mission, which ended in 2003.

Astronomers are planning on visiting Europa again – the Europa Clipper mission isn’t planned to launch until sometime in the 2020s, but after it does, it’ll orbit Jupiter and conduct about 45 flybys of the moon over its mission lifetime (Galileo only completed 10 or so). This is opposed to orbiting Europa, which would more regularly expose the spacecraft to damaging radiation emitted by Jupiter. It will have a good 9 instruments onboard, including ice-penetrating radar and an advanced mass spectrometer to study the composition of any plumes.5

An ESA mission dubbed JUICE (JUpiter ICy moons Explorer) is slated for a 2022 launch, reaching Jupiter in 2030, and will study the three Galilean moons thought to have liquid water underneath their surfaces – flying by Europa and Callisto before settling into an orbit around Ganymede.

NASA doesn’t have any future missions slated to revisit Saturn or its moons, but clearly Enceladus is a target astronomers want to get back to as soon as possible. With this newfound hydrogen, Enceladus just might be the most likely place in the Solar System to find living aliens. At least, that’s based on what we know life on Earth needs – water, the elements collectively known as “CHNOPS” (Carbon, Hydrogen, Nitrogen, Oxygen, Phosphorus, and Sulfur), and energy, and then the time for it to develop.

Will we find life on either of these moons? Or on another body in the Solar System? Only time will tell. Maybe we’ll make first contact with some microbes before April 5, 2063.

You can read my other post about a NASA press conference without aliens, here.

1. Observations show the plumes are comprised of 98% water vapor, 1% hydrogen gas, and a mixture of carbon dioxide, methane, ammonia, and organic volatiles. ↩
2. The classic image of Enceladus shows these “tiger stripes” as distinctly blue, however this is a color-enhanced image based on infrared, visible, and ultraviolet light pictures (Therefore, it wouldn’t look this striking if you stowed away on Cassini and viewed them with your own eyes) 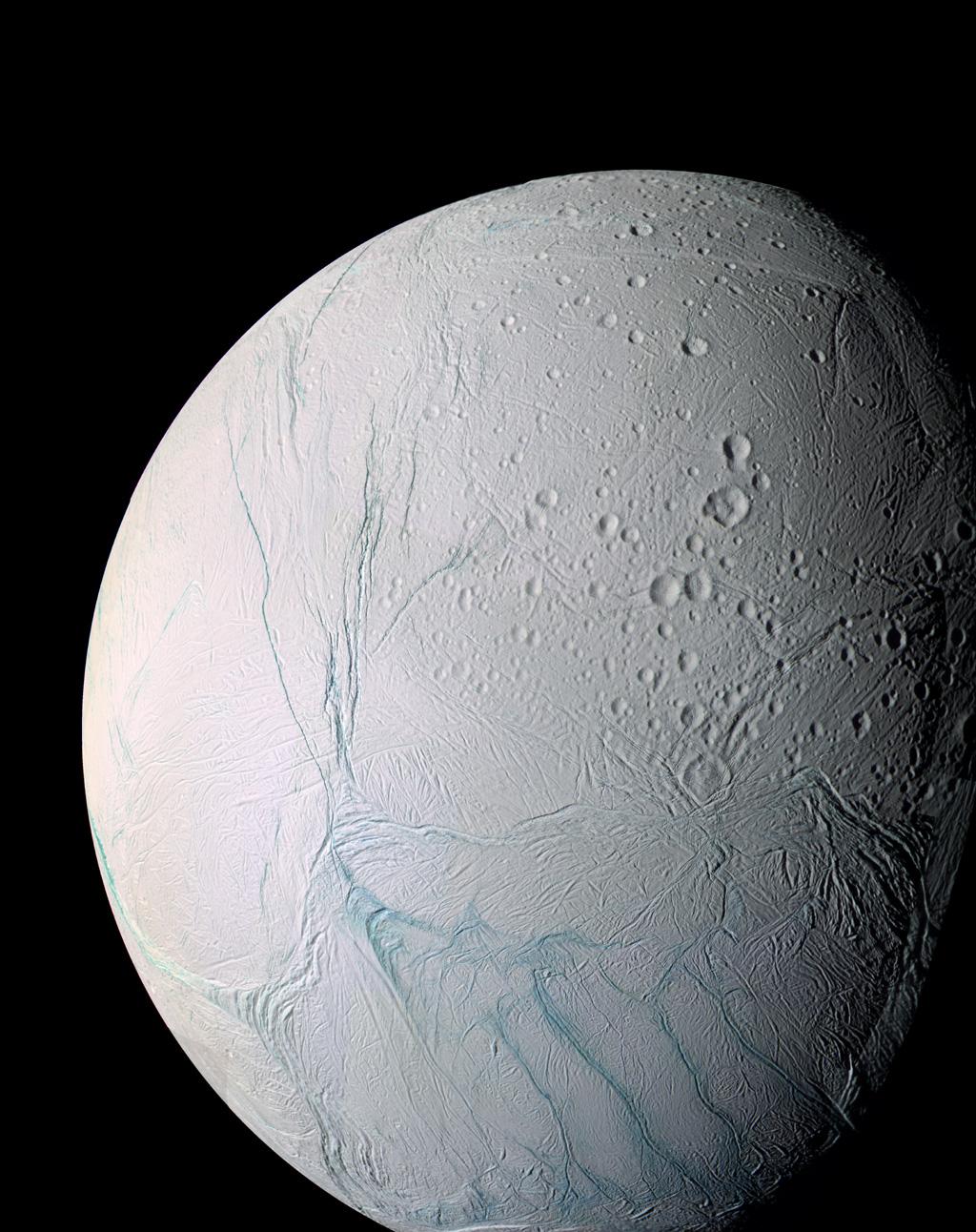 ↩
3. Do Voytek and Voyek derive from the same Czech name? Maybe. ↩
4. Europa Report was one of the 90 movies I reviewed for my Master’s dissertation on Hollywood representations of Outer Space. You can check it out, here. I also wrote a short blog post about it for Bad Background Science, which you can read, here. ↩
5. The most ridiculously named instrument is said radar, which goes by the name Radar for Europa Assessment and Sounding: Ocean to Near-surface (i.e. REASON).↩